If you wrote off QR codes as an over-hyped fad, you’re certainly not alone. But you may want to set those perceptions aside and take another look at how QR codes could help your association deliver just-in-time training content without having to completely overhaul your educational materials.

QR Codes: A Useful Tool Introduced Ahead of Its Time

Invented in 1994 by a Toyota subsidiary to improve the manufacturing process, a QR code is essentially an enhanced version of a barcode, capable of holding nearly 350 times the amount of information. It wasn’t until 2010 that the first QR code scanner and reader applications were released for smartphone platforms in the U.S. Soon after, marketers, retailers, and other industries began using them on a wider scale to bridge the gap between print and digital content.

The QR code was made possible by technology—the invention of the smartphone and mobile web browsing capabilities. At the same time, its lack of success is also due to technological limitations. Essentially, the QR code was ahead of its time.  Back in the early 2010s, in order to use a QR code, the user had to first download a special app. They used this app to take a picture of the QR code, wait for the app to process it and redirect to a website—at a time when mobile internet connections were not nearly as fast as they are today. And on top of that, users were often directed to websites that were not optimized for a mobile viewing experience.

Why Now is the Time of the QR Code

Fast forward ten years and QR codes are making a resurgence—particularly among Millennials and Generation Z. Here’s why:

Social media platforms aren’t the only ones jumping on the QR Code bandwagon. Global industries such as food manufacturing and pharmaceuticals have implemented QR codes on labels and packaging to comply with new regulations.  For instance, as part of the Smartlabel QR Code initiative by the Grocery Manufacturers Association, prominent food companies such as Coca-Cola, Nestle, and Colgate include codes on their packaging to direct consumers to a website with more product information.

One of the most valuable benefits associations provide to their members is knowledge and education. Most training and education is delivered well before the learning is used. While the learners walk away with a great foundational understanding of the material, they may not remember all the crucial details they need in a real-world situation.

For example, if you’ve ever taken a CPR or basic first aid class, you learned how to do proper chest compressions and use a defibrillator. Fast forward six months or even longer, to the first time you need to apply this knowledge. Not only are you battling The Forgetting Curve, but you are also having to do so under extremely stressful circumstances, which further affects your ability to recall specific details.

Now imagine if there was a QR Code affixed on or near the available first aid equipment that immediately served a short demonstration video or even the music loop for the Bee Gees song “Stayin’ Alive.” QR codes can be a much more practical way of delivering the exact information you need, without having to pull up and search through a website.

Other examples where QR codes could provide just-in-time training reinforcement:

If like many of us, you wrote off QR codes several years ago as an impractical tool that has lost popularity, you may want to think again. Thanks to improvements in the technology that supports the adoption and use of QR codes, these square snippets of data are gaining traction once again and are being more widely adopted not just by marketers, but by industries and end-users—particularly young professionals. Because of their ease to create and implement, organizations should consider how to adopt QR codes as a simple and cost-effective way to take existing materials and re-package them as micro-learning resources, delivered just-in-time, when they are most needed by the learner.

The Ugly Truth About Google and Your Educational Programs 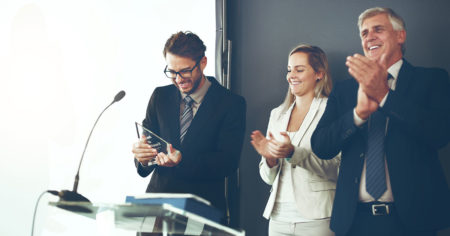